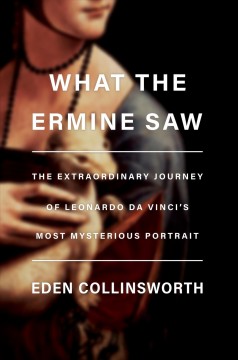 ► ▼ Google Preview
► Awards, Reviews, & Suggested Reads
▼ Summaries & More
Summary: "In the tradition of The Lady in Gold and The Hare with the Amber Eyes, the remarkable story behind one of history's most enigmatic portraits. Five hundred and thirty years ago, a young woman sat for her portrait, which was to be painted by a tall, Grecian-nosed artist known as Leonardo da Vinci. Her name was Cecilia Gallerani, and she was the teenage mistress of the Duke of Milan. With shining hair and alabaster skin, and a thin veil framing her delicate features, Gallerani held a white ermine--an emblem of pregnancy and childbirth--close to her breast. Their slender bodies appeared almost as one. Her lover, Ludovico Sforza, was a ruthless man who was betrothed to the daughter of a powerful family; he was aware that da Vinci's brilliance as a painter would not only capture his mistress's beauty, but reflect Sforza's own political prowess. Indeed, with this beguiling image, da Vinci revolutionized the genre, changing not just what a portrait looked like, but also its purpose. While the painting faithfully captures the young woman's likeness, it also bears something deeper: the essence of a "soul," one conveyed with brush strokes and more effectively than with words used by any writer. But despite the work's importance in its own time, no records of it exist during the two hundred and fifty years that followed Gallerani's death. Author Eden Collinsworth illuminates the startling history of this unique masterpiece, as it journeyed for over five centuries from one owner to the next--from the cunning Milanese duke, likely to have murdered his seven-year-old nephew for the title, to an unconventional Polish noblewoman, who counted as acquaintances Benjamin Franklin and Voltaire. From Hitler, who designated it for his private collection, to Hans Frank, the Nazi high command in Poland, who hung it above his desk until it was returned after the War to the Czartoryski Museum in Kraków. Along the way, Collinsworth reveals a bewildering maze of social alliances and cultural upheavals, polarizing political divisions and territorial fragmentation. Expertly researched and deftly told, What the Ermine Saw is an enthralling account of Renaissance Italy and its actors; a comprehensive study of artistry and innovation; a riveting tale of Nazi plunder; of art lost and found; and a reminder that genius, power, and beauty always have a price" --
► Additional Content
► Shelf Browser
► MARC Record