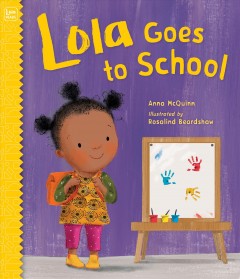 Anna McQuinn has worked in children's books for more than twenty-five years as an editor, publisher, and writer. She is the author of more than twenty books for children, including&#160;Lola at the Library,&#160;Lola Loves Stories,&#160;Lola Reads to Leo,&#160;The Sleep Sheep&#160;(Scholastic), and&#160;If You're Happy and You Know It!&#160;(Barefoot). Anna leads groups like Leo's at her local library.

Rosalind Beardshaw loved drawing from early childhood and from a young age decided she wanted to become an illustrator. She studied at Manchester Polytechnic where she earned a degree in illustration.&#160;Since graduating in 1992, she has illustrated many children's books, including two of her own stories;&#160;Grandma's Beach&#160;and&#160;Grandpa's Surprise&#160;(Bloomsbury) inspired by long summer holidays spent with her playful grandparents. Animals have also played a large part in her work. Her lurcher, Basil is proving to be a constant source of inspiration for new characters!

In her spare time, Rosalind works as a volunteer with adults who have learning difficulties. She lives in York, England.