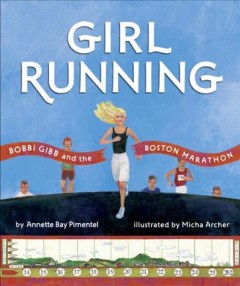 ► ▼ Google Preview
► Awards, Reviews, & Suggested Reads
▼ Summaries & More
Summary: Because Bobbi Gibb is a girl, she's not allowed to run on her school's track team. But after school, no one can stop her--and she's free to run endless miles to her heart's content. She is told no yet again when she tries to enter the Boston Marathon in 1966, because the officials claim that it's a man's race and that women are just not capable of running such a long distance. So what does Bobbi do? She bravely sets out to prove the naysayers wrong and show the world just what a girl can do.
► Additional Content
► Shelf Browser
► MARC Record
◄ Search Results Showing Item 10 of 19 Preferred library: Kenton County?
◄ Previous Next ►