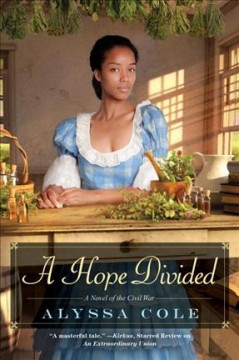 ► ▼ Google Preview
► Awards, Reviews, & Suggested Reads
▼ Summaries & More
Summary: For all of the War Between the States, Marlie Lynch has helped with coded letters about anti-Rebel uprisings in her Carolina woods; tisanes and poultices for Union prisoners; and silent aid to fleeing slave and Freeman alike. Then the vicious Confederate Home Guard claims Marlie's home for their new base of operations in the guerrilla war against Southern resistors of the Rebel cause. Escaped prisoner Ewan McCall is sheltering in Marlie's laboratory; he has his own history with the cruel captain of the Home Guard. When Marlie's freedom is endangered, she and Ewan run for their lives, following the path of the Underground Railroad.
► Additional Content
► Shelf Browser
► MARC Record
◄ Search Results Showing Item 1 of 1