The midnight watch : a novel of the Titanic and the Californian 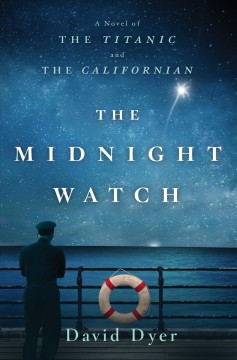 ► ▼ Google Preview
► Awards, Reviews, & Suggested Reads
▼ Summaries & More
Summary: As the "Titanic" and her passengers sank slowly into the Atlantic Ocean after striking an iceberg late in the evening of April 14, 1912, a nearby ship looked on. Second Officer Herbert Stone, in charge of the midnight watch on the "SS Californian" sitting idly a few miles north, saw the distress rockets that the "Titanic" fired. The next morning, the "Titanic" was at the bottom of the sea and more than 1,500 people were dead. When they learned the extent of the tragedy, they did everything they could to hide their role in the disaster, but pursued by newspapermen, lawyers, and political leaders in America and England, their terrible secret was eventually revealed. "The Midnight Watch" is a fictional telling of what may have occurred that night on the "SS Californian," and the resulting desperation of Officer Stone and Captain Lord in the aftermath of their inaction.
► Additional Content
► Shelf Browser
► MARC Record
◄ Search Results Showing Item 1 of 3
Next ►