Killing Kennedy : the end of Camelot 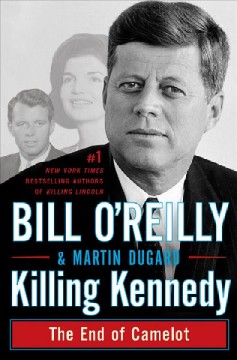 ► ▼ Google Preview
► Awards, Reviews, & Suggested Reads
▼ Summaries & More
Summary: Killing Kennedy chronicles both the heroism and the deceit of Camelot. The events leading up to the most notorious crime of the twentieth century are almost as shocking as the assassination itself. In January 1961, as the Cold War escalates, John F. Kennedy struggles to contain the growth of Communism while he learns the hardships, solitude, and temptations of what it means to be president of the United States. Along the way he acquires a number of formidable enemies, among them Soviet leader Nikita Khrushchev, Cuban dictator Fidel Castro, and Alan Dulles, director of the Central Intelligence Agency. When his brother, Attorney General Robert Kennedy, cracks down on organized crime, the list of those who have it in for the President grows. Then, in the midst of a 1963 campaign trip to Texas, Kennedy is gunned down, and the nation begins its slide into the cataclysmic division of the Vietnam War and its culture-changing aftermath.--From publisher description.
► Additional Content
► Shelf Browser
► MARC Record
◄ Search Results Showing Item 1 of 7
Next ►