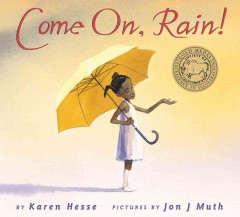 ► ▼ Google Preview
► Awards, Reviews, & Suggested Reads
► Summaries & More
▼ Additional Content
Author Notes
Reviews
Summary
Karen Hesse is the award-winning and critically acclaimed author of many books for children. Her titles include Witness, The Cats in Krasinski Square, and the Newbery Medal winner Out of the Dust, among many others. She lives in Vermont with her husband and two teenaged daughters.

Jon J Muth, renowned in the world of graphic novels, won an Eisner Award for his paintings in the graphic novel, The Mystery Play by Grant Morrison. Heâs partnered with Neil Gaiman on The Sandman: The Wake, Walter and Louise Simonson on Havoc & Wolverine: Meltdown, and J. M. DeMatteis on Moonshadow and Silver Surfer. His enchanting picture books include his Caldecott Honor Book Zen Shorts and four companion books featuring Stillwater the Panda. His book The Three Questions, based on a short story by Tolstoy, was called "quietly life-changing" by the New York Times Book Review. And the Horn Book called Jon's Stone Soup "delicious and satisfying." His exquisitely beautiful books have been translated into more than 15 languages and are cherished by readers of all ages. Jon lives in New York State with his wife and their four children.
► Shelf Browser
► MARC Record
◄ Search Results Showing Item 2 of 2
◄ Previous